For being born out of an, “oh no, it’s lunch and I haven’t even thought about what to make” moment; these stuffed potatoes came out amazing. I say stuffed potatoes, but really they’re just like potato skins minus the cheese.  Crispy skins holding all the buffalo chicken goodness with creamy ranch dressing to top it off.

The first time around I made these in under 30 minutes with the pressure cooker and a microwave potato bag my mom bought me one year. It’s not perfect but it’ll quickly cook potatoes in the microwave. I cooked the potatoes for 8 minutes, 4 minutes at a time. Pulled them out, cut them in half and brushed with olive oil, salt and pepper. Placed them under the broiler for a few minutes on each side. Pulled them out and scooped out the potato leaving a sliver of potato to keep the skin intact. This is a great option if you’re short on time or like me, rarely have the patience to bake a potato in the oven.

No secrets here, just a regular ole baked potato! Wash your potatoes, rub with olive oil, salt & pepper. Pierce the potato with a fork all over to allow the steam to release. Bake at 425 for at least 45 minutes, sometimes as long  as an hour and a half; depending on the size of your potatoes. When cooked through cut them in half and scoop out the potato leaving a bit to keep the skin intact. Your skins may already be crispy using this method, but if you want that added crisp place them under the broiler for a couple minutes.  Watching carefully so as not to burn.

After shredding with two forks, place the chicken in a large bowl and mix with the buffalo sauce and the potato you scooped from the skins. I use The New Primal Medium Buffalo sauce that is Whole30 compliant. It has a great kick and of course no sugar added. If spice isn’t your thing I’d go for the mild version, or if you want all the heat they have a hot version as well.

Load ’em up! Scoop your chicken and potato mixture into your potato skins, don’t be shy! You’ll likely have some leftover mixture as well. Once your skins are stuffed, drizzle on some ranch dressing. I use the Whole30 brand ranch dressing. It’s part of their line of new dressings and sauces and they are fantastic! There are many other compliant brands out there as well, just read your labels.

Dig in and enjoy! Leave me a comment and let me know how you made these yours! 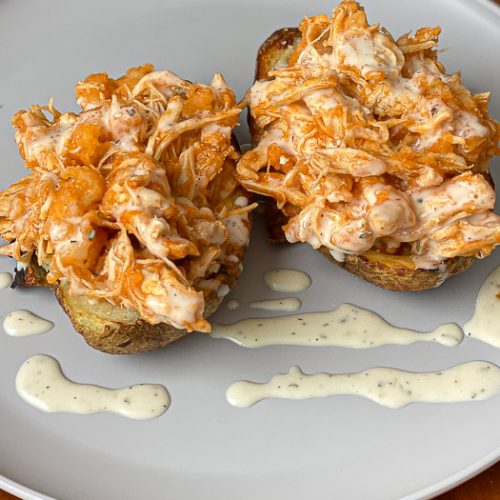 Total time depends on your cooking method for both the potatoes and chicken. This can be done super quick or by taking your time! Your choice!
Keyword Dairy Free, Gluten Free, Sugar Free, Whole30